On Monday, Network Ten in Perth commences operation from its new state of the art premises in the suburb of Subiaco.

The relocation marks the end of an era as Ten has been broadcasting from studios in Cottonwood Crescent, Dianella, since it first went to air in 1988.

The first program to air from NEW10 on Friday, 20 May 1988 was The Fast Lane, a half-hour opening preview of the new channel. This was followed by the national Olympic Telethon, a 26-hour effort to raise funds for Australia’s Olympic team heading to Seoul. 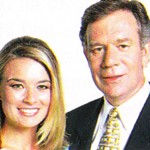 In its early days NEW10’s Dianella studios were producing local programs such as Our Town, Airplay, Kids’ Company and a goodnight message for the kids from Kenny Kidna.

The conversion to digital television in the early 2000s saw Ten shift presentation of its Perth news bulletins to Sydney. This change was reversed in 2008 when production resumed at Dianella.

The new studios are located at the Subi XO precinct at 502 Hay Street, Subiaco.

The exit of Ten from Dianella marks the end of an era, as rival networks Seven and Nine have also moved out from adjacent properties in the same precinct to new premises elsewhere in Perth.

Permanent link to this article: https://televisionau.com/2016/12/ten-perth-to-launch-from-new-studio.html