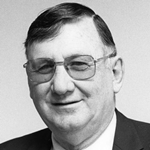 Norman May, legendary sports commentator for ABC, has died at the age of 88.

May, a keen sports fan, had been working as an insurance clerk when a chance meeting with ABC sporting supervisor Dick Healey in 1957 led to an invitation to call the surf-lifesaving.

From 1958, while television was still new, May officially joined ABC as a trainee. He called various sports for ABC radio and television and covered his first Olympic Games in 1964.

While covering the 1980 Moscow Olympic Games it was May’s enthusiastic call of the 4x100m medley relay that was to become his trademark: “Fifteen metres from the gold medal for Australia … 10 metres now, Brooks in front. Five metres now, four, three, two, one … Gold! Gold to Australia! Gold!”

May covered a total of 11 Olympic Games and 11 Commonwealth Games for ABC.

He was awarded a Medal of the Order of Australia in 1983. He officially retired in 1984 but continued to serve in various media and ambassadorial roles.

Permanent link to this article: https://televisionau.com/2016/09/obituary-norman-may.html