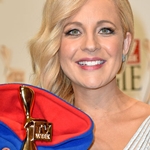 In her emotional acceptance speech, Bickmore paid tribute to her late husband, Greg Lange, who died from brain cancer in 2010. She sought to raise awareness to the disease by putting on a beanie and imploring people to spread the message and wear a beanie today (Monday).

Earlier in the night, Bickmore also collected the Silver Logie for Most Popular TV Presenter.

It was a big night for Home And Away which not only won Most Popular Drama Series but was also inducted into the TV Week Logie Awards‘ Hall Of Fame, with an introduction by former cast member Dannii Minogue. It is the fourth program in the category’s 32-year history to have received the honour — joining Four Corners, Neighbours and Play School.

The Seven Network mini-series INXS: Never Tear Us Apart scored a Logie for Luke Arnold, who played lead singer Michael Hutchence, for Most Outstanding Actor. Arnold accepted his award via a pre-recorded speech.

The presentation again had no particular host, rather relying on presenters over the course of the night. Comedian Dave Hughes started the presentation and paid tribute to Neighbours for its 30th anniversary earlier this year. The mention gave cause for Hughes to remark that Neighbours gave him his acting debut… making a guest appearance in the show. And we were taken back 17 years to see the very scene of a much younger Hughes.

Julia Morris won the crowd over with her excited presentation of Most Outstanding Entertainment Program — neglecting to mention the nominees but rather cutting straight to announcing the winner, The Voice. She more than recovered from the mishap by comically acknowledging her error and back announcing the nominees after The Voice had claimed its award.

Morris’ performance only reinforced that Logies organisers missed a golden opportunity to pair her up with Dr Chris Brown, her hosting partner on this year’s I’m A Celebrity… Get Me Out Of Here. The pair were widely credited for their chemistry in co-hosting the reality show — but Logies organisers instead had him present an award with Jennifer Hawkins.

Hamish Blake and Andy Lee parodied The Bachelor in presenting the award for Most Popular Reality Program, by staging a rose ceremony as happens on the show as a means of culling the list of 6 reality shows down to 5 nominees. It was a great idea that was well staged — with the co-operation of presenters of Big Brother, The Block, My Kitchen Rules, Bondi Vet and Bondi Rescue and last year’s Bachelor, Blake Garvey — leading to The Block taking out the award.

Comedian and Winners And Losers star Denise Scott alluded to the widely-observed fact that in the 32 years of the TV Week Logie Awards Hall of Fame that only one female — Ruth Cracknell — has been given the honour. It is a glaring discrepancy given that Australian TV has a history of accomplished, widely experienced and successful female performers.

Cricket commentator Michael Slater paid tribute to Richie Benaud, who passed away earlier this year. The lengthy segment that followed then led into a speedy slideshow to acknowledge those others in the industry that passed away during the last 12 months. The problem was that the presentation zipped past with poorly-designed graphics and captions so that viewers, and even those in attendance, couldn’t read the names of those being recognised.

Music performances came from Meghan Trainor (twice), Ricky Martin and The Script. Problems with audio seem to plague Logies performances every year and this year was no exception — with Martin in particular less than audible.

Conchita Wurst, who won the Eurovision Song Contest last year in Copenhagen, attended the awards but was only to appear in a brief interview on the red carpet and not during the awards presentation itself.

But apart from the awards themselves, the biggest contest is the ratings. In preliminary figures for the night, the TV Week Logie Awards was the 5th highest rating program of the night with an audience of 971,000 (5 cities, OzTAM), averaged over the almost four hours telecast. It is a slight increase on last year’s audience.

The Red Carpet arrivals segment which was the lead in to the awards had a preliminary audience figure of 958,000 — in contrast to tradition where the arrivals usually ranks higher than the main event.

In other preliminary results for the night, Seven’s My Kitchen Rules topped the ratings with 1,674,000 viewers with current affairs program Sunday Night (featuring a somewhat contentious report on the recent earthquake in Nepal, focusing on actor Hugh Sheridan‘s search for his brother) ranked fourth with 1,023,000.

MOST POPULAR ACTOR
Stephen Peacocke (Home And Away, Channel Seven)

MOST POPULAR DRAMA SERIES
Home And Away (Channel Seven)

Data © OzTAM Pty Limited 2015. The Data may not be reproduced, published or communicated (electronically or in hard copy) in whole or in part, without the prior written consent of OzTAM. Program performance and ranking information subject to change when not based on final program logs.

Permanent link to this article: https://televisionau.com/2015/05/the-57th-tv-week-logie-awards.html