Stars surf into Paradise
Richard Huggett (E Street, Neighbours) and Rebekah Elmaloglou (Home And Away) are the latest to join Nine‘s Paradise Beach. Elmaloglou is coming in to the series as wild child character Karen Wolfe, while Huggett plays peace activist Sam Dexter (a far cry from the actor’s days as menacing Sonny Bennett in E Street!). Elmaloglou says that while Karen Wolfe is “a good role”, she admits that in the current environment it’s not wise to be too snobby about taking on a role in a TV series. “Five years ago everyone could be very snobby about what they took — they were choosy,” she said. “But these days you can’t.” 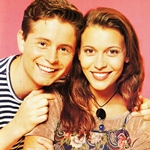 Sofie’s seriously moving to Nine
Sofie Formica, whose list of credits for the Seven Network include Saturday Disney, Now You See It, Home And Away and The Great Outdoors, is making the move to the Nine Network to co-host its new hidden-camera show, Just Kidding. “A lot of people were under the impression I was contracted to the Seven Network, but I have never been,” she told TV Week. “I was a freelance reporter for The Great Outdoors.” Formica, who admitted that she had yet to inform Seven of her decision to join Nine, will appear on Just Kidding with Steven Jacobs. Although they are old friends, this is the first time they are working together. “Hopefully the viewers will see Steven and me as the new batch of people who will be around television for the next 20 years,” she told TV Week. 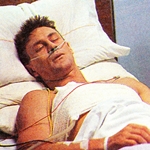 In the gun!
Blue Heelers star Grant Bowler admits he was terrified when a gun was pointed at him for an upcoming episode of the series. “It really, really freaked me out,” he told TV Week. “I was distinctly uncomfortable the first time the gun was pointed at me, despite the fact that the safety officer and the armory officer had told me it was safe. After all, a gun is made for one thing, and that’s to kill.” The episode sees Bowler’s character, Constable Wayne Patterson (pictured), in hospital with gunshot wounds that could be fatal.

“Soon in TV Week, our program listings will carry a series of four or five digits after the titles of prime time series, movies, sports events, talk shows and so on. So, for instance, you will see “Movie: Jurassic Park 12345″. The digits are known as a G-Code and, if you have an ingenious little device that is coming on to the Australian market as we speak, all your VCR programming problems will be solved. The G-Code programmer is likely to be the biggest revolution in television viewing since VCRs themselves, and TV Week is proud to be the first publication in Australia that will carry the code numbers.” 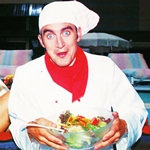 Thursday: In Beyond 2000 (7.30pm, Ten), Anthony Griffis looks at the latest fad in California — designed music specially composed to promote mental clarity, de-stress the listener and boost the immune system.