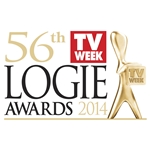 Voting is open via the Logies website until 2 March and awards will be presented at the Crown Entertainment Complex, Melbourne, on 27 April, and televised on the Nine Network.

While purchase of a copy of TV Week is no longer required in order to vote, entering a codeword as published in the magazine enables entry into the competition for two tickets to the event.

Categories open to Most Popular votes this year:

An industry panel will evaluate nominees for the presentation of the Most Outstanding categories and will choose the recipient for the TV Week Logie Awards‘ Hall of Fame Gold Logie.

Permanent link to this article: https://televisionau.com/2014/02/tv-week-logie-voting-begins.html