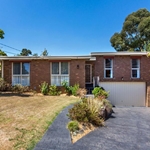 The sale may have been somewhat helped along by the mere fact that it is in Australia’s most famous street — Ramsay Street, the setting for Neighbours.

The Herald Sun reports that the property at 3 Pin Oak Court was purchased by Andrew Whitney, a Melbourne expatriate and Neighbours fanatic living in the UK.

Whitney already owns another house on ‘Ramsay Street’, buying nearby 6 Pin Oak Court (a.k.a. 26 Ramsay Street, originally occupied in the series by the Robinson family) sixteen years ago.

3 Pin Oak Court — otherwise known as 30 Ramsay Street, Erinsborough — was built in 1973 and put on the market in January.  It was the first time in 14 years that one of the homes to feature in the long-running soap had been put up for sale.  Prior to selling it had an estimated market value of $680,000 but real estate agent Barry Plant said that the lure of celebrity would have an unknown impact on the final sale price.

Ramsay Street home owners are paid a fee by the show’s producers FremantleMedia as compensation for the weekly appearance of production crews and daily visits by tourists outside their home.

In return, home owners are contractually obliged not to make any external alterations to the house without consulting the show’s producers and must keep the gardens well kept.

The amount of the fee is a well-guarded secret and is not even made public in the sale documents.  Owners must sign a confidentiality agreement before the amount is disclosed to them.

The four-bedroom house has featured in the series since 1985, when newlyweds Paul Robinson (Stefan Dennis) and Terri Inglis (Maxine Klibingaitis) ‘moved in’ to the Ramsay Street address.

Permanent link to this article: https://televisionau.com/2013/03/ramsay-street-house-sold-for-867000.html