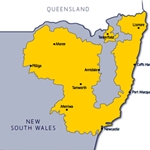 The rollout of the analogue shutdown continues with the scheduled closure of remaining analogue services in the Northern NSW market today (Tuesday).

The shutdown will affect local transmissions for ABC, Prime7 (NEN), NBN, Southern Cross Ten (NRN) and SBS — although some towns have already had their analogue services closed down to accommodate the digital signal.

According to the latest Digital Tracker figures released by the Government’s Digital Switchover Taskforce — covering the period of April to June this year — around 86 per cent of households in the Northern NSW region have already converted at least their main TV set to digital.   The pending shutdown of analogue will have no doubt seen a rush of digital tuner purchases in recent days and weeks.

The analogue shutdown will exclude parts of the Northern NSW market such as the Central Coast and Gold Coast as those areas overlap with their neighbouring capital city markets and will lose locally-transmitted analogue services when those cities are affected.

The next regions to convert to digital-only transmission will be Adelaide, Tasmania and Perth in April next year, followed by Brisbane/Sunshine Coast/Gold Coast in May.

Darwin, Sydney/Central Coast, Melbourne and remote central and Western Australia will complete the nation’s transition to digital TV in the second half of 2013.

Permanent link to this article: https://televisionau.com/2012/11/northern-nsw-goes-digital-only.html