WIN News returns for the weekend 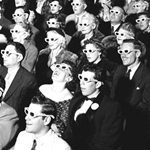 The Nine Network today (16 July) starts test transmissions in 3D in the lead-up to the network’s coverage of the Olympic Games.

Viewers with compatible tuners — and 3D glasses — will be able to view the broadcasts on digital channel 95.  Nine estimates that around 5% of households have access to a 3D television set but notes that not all households within the above areas will have access to the 3D TV signal as it will be at a lower strength to their normal channels.

While the Games are in progress, Channel 95 will broadcast a daily highlights package between 11.00am and 3.30/4.00pm.  Outside of these hours the channel will broadcast a 3D demonstration.  Further information on Nine’s 3D trial broadcast can be found at their website.

Outside of the trial 3D broadcast Nine’s normal Olympics coverage will be on its standard definition channel (Nine) and high-definition channel (GEM).  More than 300 hours of coverage are being promised — starting with the Opening Ceremony from 5.30am (AEST) on Saturday 28 July, presented by Eddie McGuire and Leila McKinnon.  Nine will have exclusive live coverage of both the Opening and Closing Ceremonies.

On competition days, Nine’s coverage will be live from 6.30pm to 9.00am (AEST) the following morning.  Then, London Gold will present two hours of Games highlights from 9.00am to 11.00am, and again from 4.00pm.

While Nine’s coverage is likely to focus heavily on Australian athletes and performances, Foxtel’s multi-channel coverage — presenting a total of 3200 hours — is promising to cover every Gold Medal event live.

Details of Foxtel’s London 2012 coverage can be found at their website.

Permanent link to this article: https://televisionau.com/2012/07/nine-starts-3d-trial-for-olympics.html