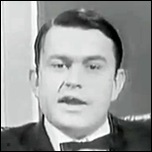 A belated obituary for former Queensland MP and media identity David Jull, who died in September this year following a battle with cancer.  He was 66.

Jull was a radio journalist and presenter in his early career, working at Brisbane radio stations 4BH and 4IP, before moving to television.  He was the first person to appear on Brisbane channel TVQ0 when it debuted in July 1965 and he continued to serve at the channel, both on screen and in management roles, for over a decade.

Jull then went on to a career in politics as the federal member for Queensland seats Bowman (1975-83) and Fadden (1984-2007).  He was also a former Minister for Administrative Affairs in the Howard government in the late 1990s and had been a shadow tourism minister for five years.

He retired from politics at the 2007 election, two years after losing a lung due to the cancer.

During his time in politics and in retirement Jull maintained his association with the media as a presenter, patron and president of Brisbane-based community radio station 101FM.

David Jull was farewelled with a state funeral on 23 September.  He is survived by sons Stephen and Andrew, stepsons Mike and Jay Goldman, and grandsons Declan and Griffin.

Permanent link to this article: https://televisionau.com/2011/12/obituary-david-jull.html