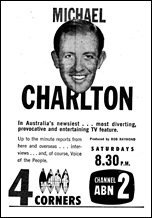 On Saturday, 19 August 1961, Michael Charlton presented the first edition of what would become a current affairs flagship, Four Corners – a program inspired by the successful BBC series Panorama. At a time when the term ‘current affairs’ was yet to be coined, TV Week described Four Corners as a “television newspaper”: “Interviewer-compere, Michael …

END_OF_DOCUMENT_TOKEN_TO_BE_REPLACED

Permanent link to this article: https://televisionau.com/2011/08/four-corners-celebrates-50-years.html