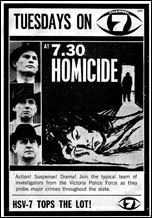 When it debuted in October 1964, Homicide marked a significant milestone in the development of Australian television drama.  There had been earlier attempts at drama series, soap operas, mini-series and televised plays but many struggled to gain a high profile in Australia’s early television landscape.  After all, it was so much cheaper to buy US …

END_OF_DOCUMENT_TOKEN_TO_BE_REPLACED

Permanent link to this article: https://televisionau.com/2010/08/win-rediscovers-homicide.html