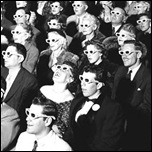 The Nine Network has boasted that its upcoming telecasts of the Harvey Norman State Of Origin will be the world’s first live sporting event on free-to-air television to be broadcast in 3D.

It had previously been tipped that the FIFA World Cup would be the first free-to-air sporting event to employ 3D technology, but the State Of Origin starts on 26 May – two weeks before the World Cup kicks off in Africa.

At this stage the 3D telecasts will be restricted to Sydney viewers only, using broadcast spectrum temporarily allocated by the Government, but Nine is working with the Australian Communications and Media Authority (ACMA) and broadcasters to be able to extend the technology to other capital cities at least.

Samsung was first in the Australian market to sell 3D-compatible sets, currently retailing for around $2500.  The sets come with active shutter style 3D glasses which are being encouraged by the industry as the optimum standard for viewing 3D TV broadcasts. 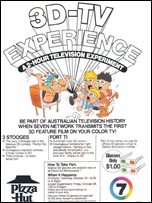 Of course, 3D is nothing entirely new – dating back to films back in the 1950s and ‘60s.  And some viewers may recall that this is not the first time that 3D technology has been trialled by television.  In the early 1980s it first became possible to transmit 3D images through television, with a US-based experiment in February 1982.  In October 1983, the Seven Network embarked on a two-hour experiment in 3D television broadcasting, featuring two vintage titles – The Three Stooges’ Pardon My Backfire and the western Fort Ti – that  could be viewed in 3D by watching through the traditional-style 3D glasses.

Seven’s experiment came as there was a renewed interest in 3D films, with upcoming releases of Jaws III, Amityville Horror III and Space Hunter expected to be available in 3D.

There was also a much more recent venture into 3D television with a segment on Network Ten’s Talkin’ ‘bout Your Generation being broadcast in 3D earlier this year.

Foxtel is expected to offer 3D programming in 2011.

Permanent link to this article: https://televisionau.com/2010/04/state-of-origin-to-kickstart-3d-tv.html