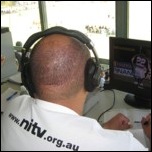 Indigenous broadcaster NITV recently issued a plea for support to gain a commitment for Government funding after the current funding period which is due to expire on 30 June 2010.

The Federal Government has now committed $15 million in funding to keep NITV broadcasting for the next 12 months.

NITV chairperson Ms Terri Janke has said in a statement:

“I thank Minister Garrett and the Rudd Government for their commitment to NITV and the Indigenous production sector. We now have the certainty for the immediate future to commit to staff, the Indigenous production sector, commercial partners, and most importantly our audience.  Demonstrated by the deluge of letters and messages of support we have received from right across the country, it’s clear NITV is the trusted voice for Aboriginal and Torres Strait Islanders and a critical cultural reference point for all Australians.”

However Arts Minister Peter Garrett has explained that a review of the Government’s funding of indigenous broadcasting activities, including NITV and other broadcasters such as Imparja Television and community radio, will be carried out.  Input will be sought from the indigenous community and broadcasters such as NITV as part of the review.  The review will explore options for the future funding and carriage of indigenous media to the wider audience and may include involvement with the recently-announced VAST operation.

NITV is currently broadcast on free-to-air television in Alice Springs, Mount Isa, Broome and approximately 150 remote area sites.  It currently has no free-to-air carriage in any capital city apart from a trial broadcast on Sydney’s Digital Forty Four which is soon to be discontinued.  NITV is also available on pay-TV operators across Australia.

Permanent link to this article: https://televisionau.com/2010/04/nitv-gets-funding-lifeline-for-now.html