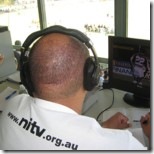 The National Indigenous Television network (NITV) is warning that it will be forced to close by 30 June 2010 if it does not get a commitment for continued government funding.

NITV, launched in 2007, currently broadcasts on a range of free-to-air and pay-TV platforms – including digital free-to-air in Sydney (on the trial Digital Forty Four service that is soon to be discontinued), through pay-TV providers including Foxtel, Austar and Optus, and through approximately 147 free-to-air transmitters across remote and outback Australia, including Alice Springs (UHF 34) and Mount Isa (UHF 35).  It is also available direct from the Optus Aurora satellite and can be seen via in the in-house television service in Parliament House in Canberra. 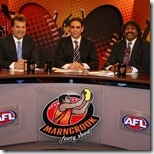 NITV presents a 24/7 hour television service and produces most of its own programming – with more than 1400 hours of first-run programming aired – including The Marngrook Footy Show (pictured), Living Strong, Barefoot Rugby League Show, Milli Milli Nganka and NITV Nightly News.

The station employs around 50 Australians, with 70 per cent those being Indigenous, and through itself and its outsourced productions provide training and experience to Indigenous Australians seeking a career in television.

Once the Digital Forty Four trial service is closed down at the end of April, almost 95 per cent of homes that can access NITV will only be able to do so via subscription or pay-TV.  With increased and continued funding, NITV can also expand its distribution networks to increase its free-to-air TV coverage to place it on a comparable reach with the existing national and commercial television services.

A not-for-profit public company, NITV is seeking a commitment from the Government to maintaining its funding beyond 30 June 2010 and encourages viewers and supporters to put their support to NITV in writing to: 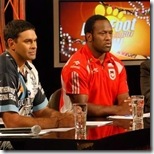 More information on NITV can be found at its website and NITV can also be followed on Twitter.

Permanent link to this article: https://televisionau.com/2010/03/nitv-risks-shutdown-without-funding.html