This weekend marks the 50th anniversary of the launch of Queensland’s first TV station – QTQ9.

QTQ9 was opened on Saturday 16 August 1959 and this weekend the channel presents a one-hour special 50 Years Of Television. 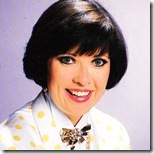 The program will feature some of the landmark moments of QTQ9 including appearances by two of the channel’s most famous discoveries that went on to become national household names – Jacki MacDonald (pictured) and Kerri-Anne Kennerley (nee Wright).

Also featured is former newsreader and station executive Hugh Cornish, the first person to appear on QTQ9 on opening night and who recalls the frantic activity of that historic occasion.

Veteran TV producer and presenter of the 1970s Paul Sharratt appears in an interview taped earlier this year.  Sharratt, who hosted variety programs Studio 9 and Orton’s Music Hall, produced many other local programs and won four TV Week Logie awards for Most Popular Male Personality in Queensland, died suddenly of a heart attack in Los Angeles in March this year.

Joy Chambers, one of the panelists on long-running game show I’ve Got A Secret and now Mrs Reg Grundy, recalls her first audition at QTQ9 and how it changed her life from then on.

The program also covers some of the historic news and sporting moments to be covered by QTQ9 – including former newsreader Don Seccombe’s coverage of the 1974 floods – and a few bloopers as well. 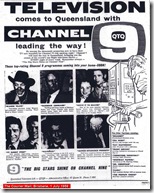 QTQ9, which also presented a tribute to 50 years of news in March, is the first of a number of stations celebrating 50 years of broadcasting:  NWS9 Adelaide celebrates its 50th next month, TVW7 Perth and ADS10 (formerly ADS7) follow in October and Brisbane’s ABQ2 and BTQ7 in November.

Then the first half of next year will mark the 50th anniversary of transmission for ABS2 Adelaide, ABW2 Perth, TVT6 (now WIN) Hobart and ABT2 Hobart.

Permanent link to this article: https://televisionau.com/2009/08/50-years-of-queensland-tv.html