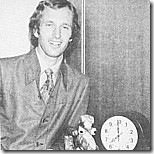 This site didn’t do anything for April Fool’s Day yesterday – however an April Fool’s gag that we published this time last year has become a hit.

Last year we featured There’s an April fool born every centiday, documenting a TV Times report from 1975 when the Adelaide version of ABC’s This Day Tonight program ran the story that we were going to adopt metric time.

The report, presented by Nigel Starck (pictured) and featuring South Australian deputy premier Des Corcoran and even a metric-converted clock at Adelaide’s town hall, caused a great deal of confusion, leading to ABC’s switchboard getting calls from viewers well after the report had aired.

Since that post was made to the blog, the story was discovered by the website Museum Of Hoaxes and even ranked the gag at #15 in the Top 100 April Fool’s Day hoaxes of all time.  The mere mention of the hoax story on the site, particularly in the last couple of days, has seen traffic to our original blog post take a huge spike – a spike not seen since an episode of 20 To 01 ranked ‘nudity at Number 96’ among its most memorable moments in television, and sent web browsers around the country seeking evidence of said nudity.

So a big cheerio to Museum Of Hoaxes!

Permanent link to this article: https://televisionau.com/2009/04/everyone-loves-an-april-fool.html