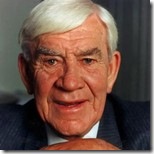 Despite retiring from the game of Australian rules in the 1950s, former Collingwood premiership captain Lou Richards (pictured) has become, unofficially at least, a legend of the game.

Last week, Richards’ former football club put out a call to the AFL Commission to have his legend status officially recognised in the league’s Hall of Fame despite the fact that statistically he is ineligible.

But today, 15 March, is Richards’ 86th birthday and The Age‘s Real Footy website today pays tribute to a larger-than-life character of the game who has continued to entertain fans in covering the game for newspapers, radio and television since the 1950s.

As a columnist for The Sun newspaper he was nicknamed ‘Louie the Lip’ and he went on to cover the then Victorian Football League for radio 3XY, followed by 3DB and then on television at HSV7.  Richards’ association with Seven would last almost thirty years through his football commentary as well as his colourful contributions to the long-running World Of Sport (1959-87) and the late-night favourite League Teams.  Richards, and his on-air sparring partner Jack Dyer, also appeared in a comic cameo on drama series Skyways.  When HSV7 lost the rights to cover VFL at the end of the 1986 season, and the station was taken over by Sydney interests in 1987, Richards’ media career took an unexpected turn when he later turned up at rival channel GTV9, even though the channel had no broadcast rights to the VFL.

Nine put Richards to work presenting a football segment on National Nine News as well as co-hosting the Sunday edition of Wide World Of Sports with Max Walker, and later the Sunday edition of The Footy Show which was seen as a throwback to the halcyon days of World Of Sport with frank discussion of Australian rules and studio segments including the handball competition.

Recent years have seen Richards’ health deteriorate and, as a result, his involvement in The Footy Show being cut back to cameo appearances, although he continued to present the handball competition as a pre-recorded segment.  But Nine has decided that it is time for “Louie The Lip” to formally retire from the program but, should he be able to, will be welcome to make guest appearances.  And in a legacy to “Louie”, the program will continue to name the handball competition in his honour and the program’s player of the year will still be awarded the Lou Richards Medal.