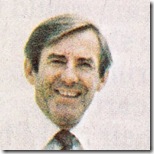 Former Melbourne television identity Brian Naylor (pictured) and his wife Moiree have been found dead after the horrific bushfires that have ravaged Victoria over the weekend.  The couple’s bodies were found tonight after they were reported unaccounted for after a blaze tore through the rural town of Kinglake.  More than eighty have been reported dead …

END_OF_DOCUMENT_TOKEN_TO_BE_REPLACED

Permanent link to this article: https://televisionau.com/2009/02/brian-naylor.html