ABC1 remembers The Wild One 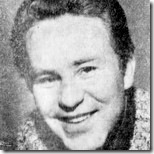 With a career starting in the early-’50s, O’Keefe became a national identity as a performer, and later host, on one of Australia’s first rock music shows, ABC‘s Six O’Clock Rock, from 1959 to 1962. 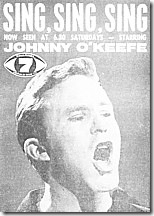 After Six O’Clock Rock, O’Keefe went to host the Seven Network‘s The Johnny O’Keefe Show, later re-named Sing Sing Sing, and the 0-10 Network‘s Where The Action Is.

Amidst a recording career that produced over 50 singles and 100 albums, O’Keefe survived a near-fatal car crash and several nervous breakdowns before staging a comeback in the ’70s.  He was honoured in an episode of the original This Is Your Life in 1975, and made a guest appearance on Sounds only days before he passed away in October 1978 at the age of 43.

The life of Johnny O’Keefe was later dramatised in a TV mini-series Shout! and in more recent years his life story was also adapted to a stage spectacular.  In 1988, he was posthumously inducted into the ARIA‘s Hall of Fame.

Permanent link to this article: https://televisionau.com/2008/10/abc1-remembers-the-wild-one.html