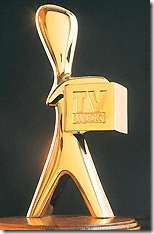 Former Home And Away star Kate Ritchie has won her second Gold Logie for Most Popular Personality on Australian Television. The actress, who has recently left the series after twenty years on-air, also won the award for Most Popular Actress. Full list of this year’s TV Week Logie winners, in order of presentation: Most Popular …

END_OF_DOCUMENT_TOKEN_TO_BE_REPLACED

Permanent link to this article: https://televisionau.com/2008/05/tv-week-logie-awards-2008.html