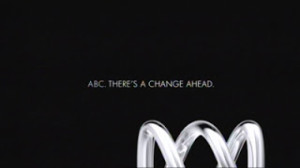 Well haven’t things got into a spin for our national broadcaster Aunty ABC? There has been speculation for some time that ABC was planning a visual revamp of its two television channels – the traditional channel known to many simply as ‘Channel 2’ but branded as ABC, and the relatively new digital-only channel ABC2. With …

END_OF_DOCUMENT_TOKEN_TO_BE_REPLACED

Permanent link to this article: https://televisionau.com/2008/01/abc-logo-change-sparks-national-fear.html