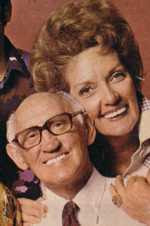 Ever wondered what happened to the cast members of Number 96?Following from a recent reunion of cast members from The Young Doctors (1976-83), this week’s episode of Seven‘s Where Are They Now? features a reunion of former cast members of the saucy 1970s soap that was a ratings giant.Sadly, favourites like Ron Shand and Pat …

END_OF_DOCUMENT_TOKEN_TO_BE_REPLACED

Permanent link to this article: https://televisionau.com/2007/07/the-sun-sets-on-southern-cross.html