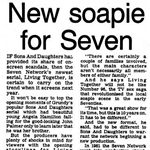 It was 30 years ago — 18 March 1985 — and, after much promotion, Seven‘s new drama series Neighbours was making its debut.

The first episode made a rather cryptic entrance, straight into a dream sequence, as Danny Ramsay (David Clencie) finds himself surrounded by family and neighbours who take great delight in laughing at him in the middle of the street at night. Recurring nightmares seem to be plaguing the youngest Ramsay, with the theme tending to be the focus of his older brother, Shane (Peter O’Brien), who is his father Max’s (Francis Bell) pride and joy training to be an Olympic diver.

Meanwhile, on the eve of his wedding, Des Clarke (Paul Keane, pictured) was having his buck’s night at his home at 28 Ramsay Street. Daphne Lawrence (Elaine Smith, pictured) was called in as the stripper but the confines of the early timeslot had to leave a lot to the imagination.

Meanwhile, nervous bride-to-be Lorraine Kingham (Antionette Byron) was having a heart to heart with bridesmaid Julie Robinson (Vikki Blanche). Next thing we knew Lorraine and her parents were on Des’s doorstep first thing the next morning to announce the wedding was off. Cue Daphne’s re-appearance at the house and awkwardness ensues. Lorraine suspects Daphne had stayed the night (she hadn’t), while Mr Kingham (James Taylor) recognises her as a former receptionist at his firm who had been pursuing a case of sexual harassment against him.

So, after watching that first episode, I made the call: “Yeah, it’s OK, but it will never last.” How wrong I was. Although in my defence I was actually almost spot on, as Seven had axed the show a few months later following mediocre ratings in Sydney. In the harbour city Neighbours had been slotted at 5.30pm up against Perfect Match, a game show getting huge ratings that most prime time shows would have killed for. With the series getting modest but sustainable ratings in Melbourne (at 6.00pm) it became a victim of network politics. The member stations of the Seven Network eventually sided with Sydney’s assertion that there wasn’t room for three soaps in the schedule — and that Sons And Daughters and A Country Practice (both Sydney-based productions) were still doing OK. So the Melbourne-based Neighbours got the chop. And who was to predict that while Seven was preparing to turn Ramsay Street into TV landfill, the show’s producers were pitching it to Network Ten. Although Ten had established itself as a leader in big budget mini-series its cupboard of ongoing dramas was decidedly bare — with only Prisoner in production and its time was almost up.

Ten’s pick up of Neighbours made front page news as it was the first time an axed series was to be revived by another network. It was a major gamble that didn’t pay immediate dividends, again with Sydney audiences struggling to show an interest. The eventual star power of young talent including Jason Donovan, Kylie Minogue, Guy Pearce and Annie Jones, coupled with some clever public relations eventually saw Neighbours spark a response in Sydney. Even with this renewed interest in the show, at best it was only expected to have a few years in it. At the time most Australian soaps tended to fizzle out after five or six years.

Even when the BBC bought the series for a daytime timeslot, still nobody could have foreseen the potential for Neighbours’ longevity. But then it was given the higher profile timeslot of 5.30pm. The little show from Melbourne that had already been axed once was suddenly watched by 20 million viewers across the UK and had bumped local dramas Coronation Street and EastEnders from top spot in the ratings. Neighbours went on to become a global phenomenon with sales to over 50 countries, dubbed into numerous languages and making superstars of its cast — not just in Australia and the UK but also in Hollywood.

From that point it seemed that my earlier prediction was certainly proven wrong. Neighbours was here to stay. It has managed to survive more channel changes — as it was taken over by Channel 5 in the UK in 2008 and shifted to Ten’s secondary channel Eleven in 2011.

Today, more than 7000 episodes on, it clocks up its 30th anniversary. Its audience numbers are not what they once were but the show continues to earn its place in Australian and British popular culture.

Neighbours has commemorated its 30th milestone with former cast members returning — including Paul Keane who played the jilted fiancé in the first episode.

Network Ten also paid tribute on Monday night with the special Neighbours 30th Anniversary: The Stars Reunite, featuring interviews with past and present cast members and some of the highlights, and possible lowlights, of the most famous street in Australia. The special will soon be available on DVD. Neighbours currently screens weeknights at 6.30pm and repeated from 2.30pm Sunday on Eleven.

Permanent link to this article: https://televisionau.com/2015/03/neighbours-i-said-it-wouldnt-last.html