A host of fun!
All Together Now star Steven Jacobs will be joining Jo Beth Taylor to co-host a special edition of Australia’s Funniest Home Video Show, with the show featuring some of his own bloopers from All Together Now. With production of All Together Now said to be winding up Jacobs is looking for a new gig whether it be hosting or acting. He is currently presenting a Saturday morning radio show that is broadcast across the country and last year co-hosted the short-lived Nine Network show Saturday At Rick’s. “Hosting, I got a buzz out of Saturday At Rick’s because it was live TV — that was great,” he told TV Week. “It’s more of a challenge because people have to like you.  You can’t hide behind anything.” 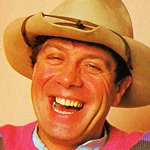 Hats off to Molly
Hey Hey It’s Saturday‘s Ian ‘Molly’ Meldrum (pictured) has recently been honoured for his contribution to the music industry with a special achievement award by the Australian Record Industry Association (ARIA), presented to him at the recent ARIA Awards.  It is only the second time ever that ARIA has made such an award.  Although he is best known for his role as host and talent co-ordinator for Countdown, which ran from 1974 to 1987, his career in the industry dated back almost a decade earlier with appearances in pop music shows Kommotion and Uptight and writing for Go Set magazine.  Since 1975 he had been TV Week‘s own pop music columnist and has recently started up his own record label, Melodian.  Former Countdown producer Michael Shrimpton paid tribute to Meldrum’s achievement:  “He is the most extraordinary one-off personality.  He has no standard way of approaching anything.  But what he does have is an incredible dedication to, and love of, music.  His childlike enthusiasm just sweeps everything aside.” 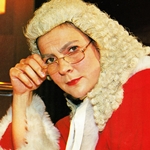 Here comes the judge
Fast Forward star Marg Downey leads the cast of comedians to feature in the upcoming Seven Network comedy special Fast Forward’s Royal Commission Into The Australian Economy.  Downey plays the part of Dame Victoria Market (pictured), the judge presiding over the commission.  Also starring in the special are Jane Turner, Steve Blackburn, Glenn Robbins, Gerry Connolly, Michael Veitch, Magda Szubanski, Geoff Brooks, Gina Riley and Frank Gallacher.  For Downey the role of Dame Victoria presented a welcome change to the normal pace of one-minute sketches that Fast Forward churned through.  “It was nice to have a good, old, solid script to get your teeth into,” she said.  “It’s a great role, a really good example of John Clarke‘s writing.”

“The future of the ARIA Awards as a fully produced television special must be in serious doubt.  Despite that fact that some of the big names in Australian music participated in this year’s show — the second to be televised — the lukewarm ratings have left a bitter taste in the mouths of executives at the Nine Network.”

Program Highlights (Melbourne, May 2-8):
Sunday:  Sunday night movies are My Left Foot (Nine) and Dying Young (Ten) up against the debut of two-part mini-series Jewels (Seven).  Compass (10.30pm, ABC) looks at the topic of euthanasia.

Tuesday:  In All Together Now (8pm, Nine), when Tracy (Rebecca Gibney) goes away, Thomas (Steven Jacobs) arranges for his maths teacher’s wacky sister (Alison Whyte) to move in as a housekeeper.  Vince Colosimo guest stars in Law Of The Land (9.30pm, Nine).

Wednesday:  In Newlyweds (8pm, Seven), Peter (Chris Gabardi) is seen in a compromising situation with an attractive jeweller while buying a ring for wife Allie’s (Annie Jones) birthday.  The Australian economy comes under the scrutiny of the team from Fast Forward in the two-hour special A Royal Commission Into The Australian Economy (8.30pm, Seven).

Thursday:  In Getaway (7.30pm, Nine), Law Of The Land star Debbie Byrne and her husband, actor Neil Melville take viewers on a tour of their lodge and farm in Apollo Bay, Victoria.