Lights, camera… Kieren!
Swimming champion Kieren Perkins (pictured far right) has signed a two-year deal with Network Ten as a station personality and star of its Commonwealth Games coverage in 1994.  The 19-year-old who laughs at his perceived public image of “the boy next door… superhero” says there is little chance of getting too confident of himself in his new role.  “I’ve got a lot of friends who take pleasure in making sure I don’t get egotistical,” he told TV Week.  “I try not to, but sometimes it’s hard when you’re around the media and celebrities and all you hear about is yourself and how wonderful you are.  It’s good to have friends.”   He also said that despite soapie producers vying for his services he will not be making appearances in such programs, diplomatically dismissing them as “not my cup of tea”.

Why the affair really ended
Although A Current Affair host  winner Jana Wendt (pictured) is walking away from the top-rating program to spend more time with her son Daniel, it appears that a rift between Wendt and Nine has also led to her decision.  “Jana hasn’t been happy since Kerry Packer regained the network and her ex-managing director, Sam Chisholm, left to work for Rupert Murdoch in London,” one source told TV Week.  She was also said to be unhappy over the network’s treatment of her husband Brendan Ward, who has worked all year on her series of special interviews.  In a last ditch attempt to get Wendt back on board, Nine will soon put to air the first of the specials that was to have screened months ago.

Wallaby of Broadway!
Terry Willesee has said that since starting work in the US on the Fox network’s A Current Affair the biggest stumbling block has been his Australian accent.  “During my first days here I rang up someone to arrange an interview and said, ‘Hello, Terry Willesee here’.  They listened for a second and said, ‘Jerry Wallaby?’, and I said, ‘No, it’s Terry Willesee’, and they responded, ‘Terry Wannasee?’,” he told TV Week.  But he realises that the language barrier affects both sides.  “The truth is I am still feeling my way, because the culture here is so different and even though I have an American wife, you still have to learn a different language.”

Lawrie Masterson: The View From Here
“The topic of whether or not the recently presented AFI Awards should have been shown on television became vexed, largely due to people from within the AFI itself.  It was a bit sad in a way to tune in to the ABC on the night of the awards and watch the Melbourne edition of The 7.30 Report do an excellent build-up.  Most of the program was live from the awards venue and, as it built to the big moment… the ABC screened a repeat episode of Mother And Son, followed by a re-run of the 1981 movie Monkey Grip.  Please don’t read that as a criticism of the ABC — it is not meant to be.  It is merely to underline the fact that this year there was higher than usual interest in the AFI Awards — due largely to Strictly Ballroom — but obviously no-one could drag them over that rise between an expensive night out that’s covered by the TV news and an expensive night out which also is the subject of a full-scale television production.”

Thursday:  Ten returns to Flemington for five hours of coverage from Oaks Day at the Melbourne Cup Carnival.  In Police Rescue (ABC), Angel (Steve Bastoni) struggles with his emotions during a siege with a crazed artist.  SBS documentary series Through Australian Eyes follows the story of Dr Duong Quynh Hoa who during the Vietnam War risked her life for six years to co-ordinate health posts.

Friday:  ABC presents the series final of children’s show Big Square Eye.  Nine has a late-night highlights package of the practice and trials for the Australian Grand Prix from Adelaide. 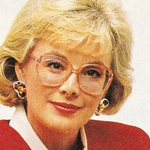 Saturday:  Afternoon sport includes the trials for the Australian Grand Prix (Nine) and Honda Stakes Day, the final day of the Melbourne Cup Carnival (Ten).  In health/lifestyle series Live It Up (Seven), Tracey Bowden reports on hip replacement surgery, Dr Rosie King (pictured) exposes the unrealistic expectations of parenthood, and Mike Hamilton reports on a vasectomy procedure from decision time right through to the final snip.