TV historian Andrew Mercado and remembered the era of Number 96, which came to a close in 1977, and its ample displays of nudity. Showbiz reporter Craig Bennett also recalled Number 96 and its Melbourne-based counterpart The Box, while also remembering The Restless Years and US shows like Happy Days, The Love Boat and Laverne And Shirley. 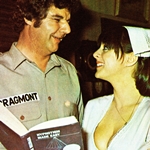