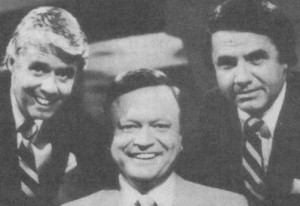 A reunion of familiar Melbourne television identities from the 1960s on the set of Tonight With Bert Newton in 1984. Pictured with Bert Newton (centre) are Ken Delo and Jonathan Daly — a popular American night club act that came to Australia in the early 1960s and were subsequently offered their own late night TV program, The Delo And Daly Show, for the Seven Network in competition with GTV9’s In Melbourne Tonight, featuring Newton. Picture: TV Week, 2 June 1984.

Permanent link to this article: https://televisionau.com/flashbacks/bert_delo_daly