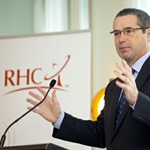 The Rural Health Channel (RHC Channel 600), which has been broadcasting since 21 May, was officially opened in Canberra yesterday (Tuesday) by federal ministers Tanya Plibersek, Stephen Conroy (pictured) and Warren Snowdon.

The new channel is an initiative of the Rural Health Education Foundation, an independent, non-profit organisation that since 1992 has provided free distance learning education programs to more than 50,000 health professionals.

RHC is now being made available to the wider regional community via the VAST satellite system — the platform being employed to carry digital free-to-air channels to regional and isolated areas where terrestrial television reception is unavailable — to improve the promotion of health related information in areas where local healthcare facilities and information may be limited.

For viewers without access to VAST, RHEF also has around 670 satellite-receiving sites around the country where programs can be viewed by the public or recorded on request.

Organisations such as Palliative Care Australia, Lifeline and the Heart Foundation have already used RHC to promote their messages and campaigns.

Permanent link to this article: https://televisionau.com/2012/06/new-channel-to-improve-rural-health.html