New regional channels on the way 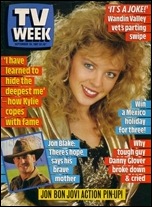 Could Ramsay Street’s most famous daughter be talking of a return to the neighbourhood?

Kylie Minogue, who turns 42 next week, has joked to UK newspaper The Sun about reprising her 1980s Neighbours character, tomboyish Charlene Robinson:

“The other day I thought how much fun it would be to do it after years of saying never.  I’ve decided how it would work.  Charlene would screech up the drive in her souped-up Mini which she’s been working on all the time.  I don’t watch the show any more, but it could be fun to do that. It could be hilarious.”

Minogue joined Neighbours as a 17-year-old in April 1986.  Her prior TV appearances had included guest roles in series including The Sullivans and Skyways and more prominent roles in children’s shows Fame And Misfortune and The Henderson Kids.  The pairing of Minogue’s character with Jason Donovan’s Scott Robinson gave the Ten Network soap its biggest drawcard, creating the show’s first ‘super couple’ and earned massive ratings when the two characters tied the knot in July 1987.

Minogue left the series in 1988, after winning a TV Week Gold Logie, to pursue her then fledgling recording career, with Charlene last seen driving out of Ramsay Street to head off to a new life in Brisbane. 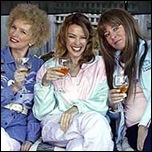 Of course, the pop princess is known to have returned to her Aussie acting roots before – in 2004 she appeared in Kath And Kim as a grown-up Epponee-Rae Craig, an appearance that was seen as a light-hearted throwback to her former Neighbours character.  After the Kath And Kim appearance (pictured) she was also reported to have expressed disappointment that she was not offered an opportunity to appear in Neighbours for its 20th anniversary in 2005, but producers claimed that any efforts to approach her management about setting up a cameo appearance fell on deaf ears.

Perhaps, with the show hitting 25 years this year, it could be an opportune time to make amends?