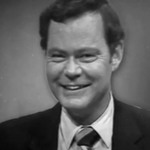 Peter Sharp, prominent television and football identity in Tasmania, has died peacefully at the age of 78.

Born in Tasmania, Sharp’s early career was in Melbourne — as a sports commentator and reporter at ATV0 in the  1960s and ’70s.

He was soon to return to Tasmania, where he appeared as a presenter and commentator on TVT6 (later to become TAS TV and WIN) in Hobart. He hosted the local World Of Sport and also appeared on the daytime program WIN Today.

His many years covering Tasmanian football, which also included The Sunday Tasmanian newspaper and radio 7HO, led to him being inducted into the Tasmanian Football Hall Of Fame in 2010.

Permanent link to this article: https://televisionau.com/2021/06/obituary-peter-sharp.html