Veteran Australian actor Judi Farr has been recognised in this year’s Queen’s Birthday Honours List for “significant service to the performing arts as an actor”.

With a career across film, stage and television, Farr came to fame as Rita Stiller in the 1960s sitcom My Name’s McGooley, What’s Yours? (pictured above with co-stars Gordon Chater and John Meillon)

She reprised the character in the spin-off series Rita And Wally, in 1968. 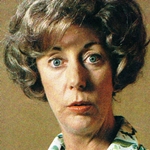 Her next major TV role was as Thelma Bullpitt (pictured) in Kingswood Country, starring from 1980 to 1982.

More recent TV credits include All Saints, Grass Roots, Please Like Me, CrashBurn and A Place To Call Home.

Other television identities recognised in this year’s honours list include:

Seven Network presenter Mark Beretta — “For service to the community through charitable organisations”.

Nine Network reporter Simon Bouda — “For significant service to the television and print media, and to the community”.