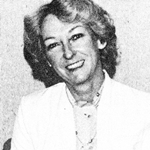 Former Adelaide TV presenter Margaret Glazbrook has died at the age of 86.

She passed away at home surrounded by her family.

From working in the sales department at SAS10 in the late 1960s, Glazbrook presented some of the advertorials on the station’s morning show, Touch Of Elegance.

When host Jaye Walton left the show in 1979, Glazbrook took over and continued to host Touch Of Elegance for over a decade — surviving the station’s transition from Ten to the Seven Network in 1987.

In a statement, a spokesperson for Seven said:  “During her 10 years as host she interviewed everybody from Sir David Attenborough (her favourite interviewee) to John Travolta and Liberace and 1940s/50s matinee idol Stewart Granger. Channel 7 send its condolences to Margaret’s family.”

Permanent link to this article: https://televisionau.com/2017/10/obituary-margaret-glazbrook.html