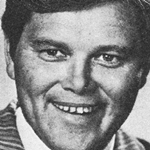 Clem Dimsey, best known as a former race caller for the Ten Network, has died at the age of 74.

With a keen interest in horse racing, Dimsey called his first race at the age of 17 over the public address system at a race meeting in the small Victorian town of Quambatook.

By the mid-1970s he was working at Melbourne radio station 3MP and during the 1970s and ’80s was racing commentator for ATV0 (later Ten) in Melbourne.

He called the Melbourne Cup for the Ten Network for a number of years. He also made a cameo as a race caller in the long-running drama series Prisoner.

Permanent link to this article: https://televisionau.com/2015/09/obituary-clem-dimsey.html

Leave a Reply to Carmel and Geoff Cancel reply