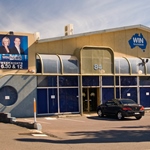 WIN Television is moving its Canberra operations from Kingston to a new site in the industrial suburb of Fyshwick.

The Kingston site, 1786 square metres in size and less than one kilometre from the Canberra GPO, is to be auctioned by Colliers International on 3 September.

WIN has occupied the Wentworth Avenue address since it debuted in Canberra in 1989, although it has not hosted any production there since news presentation was moved to Wollongong in 2013.

The property is expected to be redeveloped into apartments.

Permanent link to this article: https://televisionau.com/2015/08/win-to-move-out-of-canberra-site.html