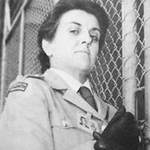 Actor Maggie Kirkpatrick, best known for playing Joan ‘The Freak’ Ferguson in the long-running series Prisoner, has filed an appeal against her conviction for a historic sex abuse charge.

Kirkpatrick, 74, was earlier this week found guilty of two charges of indecent assault and one count of gross indecency from an incident that occurred with a 14-year-old girl at Kirkpatrick’s Prahran home in 1984. Kirkpatrick said in a recorded police interview that she had taken the girl, a keen Prisoner fan, home for dinner but did not abuse her.

She was spared a jail sentence but instead given an 18-month community corrections order, including 100 hours of community service, and would be placed on the sex offenders’ registry for eight years.

Kirkpatrick played the role of corrupt prison officer Ferguson in Prisoner from 1982 to the series’ conclusion in 1986. She also starred in Richmond Hill and had guest roles in various programs including Hey Dad, Blue Heelers, All Saints, Home And Away and Pizza.

The case is to return to court on 11 September.

Permanent link to this article: https://televisionau.com/2015/08/maggie-kirkpatrick-to-appeal-conviction.html