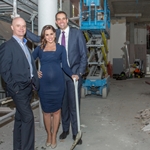 After 55 years operating from studios in North Adelaide, NWS Nine Adelaide is on the move to new premises in the Adelaide CBD.

Refurbishment at the new address, 169 Pirie Street, has commenced with Nine’s 100-strong staff expected to be onsite from the third quarter of 2015.

Nine will also gain naming rights to the former Adelaide Bank building and will occupy space previously used by Bendigo Bank. The redevelopment will include a glass-fronted studio at street level, enabling passers by to witness production from the street.

“Since we acquired Nine in Adelaide last year Sean O’Brien and the team have worked tirelessly to build the business and connect with the community.

“This move to the heart of the city, to become an integral part of the fabric of Adelaide, will reinforce that commitment.

“Congratulations to Sean and the team who have secured this new site for us.”

“We have undergone significant change over the past twelve months.

“Our business has grown and now is the time to undertake the biggest change in our history since we started broadcasting in 1959.

“We leave the bricks and mortar behind but take our memories to a building we have designed to support a business that is no longer just about television, but encompasses digital, events, social media and a resurgence in community involvement.”

NWS has been operating from its existing Tynte Street site since it began broadcasting in September 1959. The studios have hosted a number of productions, including national programs Here’s Humphrey and The Curiosity Show. In more recent times the station’s ‘Kevin Crease Channel 9 Studio’ has also been used as a venue for events such as the Adelaide Fringe Festival. Permanent link to this article: https://televisionau.com/2014/10/nine-adelaide-is-on-the-move.html