Heartbreak High signs Kym Wilson
Former A Country Practice star Kym Wilson will be arriving soon into Heartbreak High. Playing the part of rebel schoolteacher Sam Robinson, Wilson replaces Sarah Lambert whose character Christina Milano will be making only guest appearances. Since leaving ACP, Wilson has been busy with theatre studies plus a role in the upcoming TV series The Man From Snowy River. “In ACP I wasn’t sure if I was a teenager or a young woman,” Wilson told TV Week. “It changed every episode, depending on the writers.” She will be taping her first scenes for Heartbreak High this week and is expected to debut on screen in August.

Simon’s flying high into war pilot
Former E Street and Home And Away star Simon Baker-Denny is in London to film a pilot for a new sitcom from the producers of Allo Allo and Dad’s Army. He will be in London for two weeks, his first trip to the UK, for the sitcom project titled Which Way To The War. “As this is my first trip to England I would have loved to see the English countryside. It’s disappointing, but I want to be a working actor,” he told TV Week. “I haven’t a clue who I’ll be working with, but I know there are two Aussie characters.”

Sarah cuts in!
Sarah Chadwick, formerly of GP, The Flying Doctors and short-lived sitcom Late For School, has been busy dealing with shysters and drag queens. In an episode of The Damnation Of Harvey McHugh, she plays a government film censor who is blackmailed by the scheming Minister (Philip Quast). And in the new movie The Adventures Of Priscilla: Queen Of The Desert, she plays the wife of a drag queen (played by Hugo Weaving). “I travelled to Alice Springs and Kings Canyon for shooting… the whole experience was bizarre, but gorgeous,” she told TV Week. “It’s a film that has a nice little message and it’s also a bit sad. From the bits of the film I’ve seen so far, it looks extraordinary.” 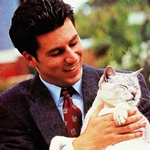 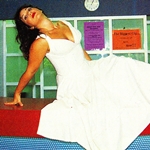 “While I doubt that Elle McFeast (Libbi Gorr, pictured) has earned a place among great Australian comedy characters at this stage, until now I have counted myself as quite a fan. Certainly she has lifted her profile from “football siren” on Melbourne radio to host of a much broader based, if still sports-orientated, national television program, Live And Sweaty. If Sex, Guys And Videotape was intended as the next step in broadening this profile, then I suspect Elle will finish up with mud — or worse — all over those trademark boots. If the show is meant to be a humorous look at the way men regard their sexuality, then it is not very funny. If it is meant to be serious, then it hardly ranks as a social document.” 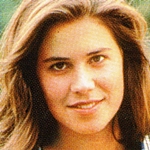 Monday: In Home And Away (7pm, Seven), Angel (Melissa George) tries to rekindle her romance with Shane (Dieter Brummer). Mary Kostakidis interviews Clive James in The Talk Show (7.30pm, SBS). In Frontline (8pm, ABC), Brooke (Jane Kennedy) hosts the show for a week after Mike (Rob Sitch) gets to do an overseas story.

Thursday: Technology program The Big Byte (7.30pm, SBS) presents its series final. In The Damnation Of Harvey McHugh (8.30pm, ABC), Harvey (Aaron Blabey) is sent to work in the Family Court and is ordered to look after a frozen embryo that is the centre of a custody dispute. After four years, the late night/early morning reruns of Prisoner (4am, Ten) come to an end as the series reaches its 692nd and final episode with a dramatic finish.

Friday: In Home And Away (7pm, Ten), Angel (Melissa George) makes Shane (Dieter Brummer) an offer he can’t refuse. In The Great Outdoors (7.30pm, Seven), Ted Egan joins entertainer Geraldine Doyle for all the festivities of the Australian National Folk Festival in Canberra, and Penny Cook meets wildlife photographer Steve Parrish. The FIFA World Cup kicks off in the US with the Opening Ceremony (4am, SBS) in Chicago, followed by the opening match between Germany and Bolivia (5am, SBS).