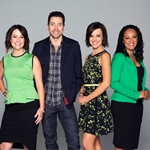 Network Ten‘s hopes of entering the breakfast TV market have been dashed for a second time, with Wake Up to make its final appearance this Friday.

Also to finish up at the end of the week are Ten’s early, morning and late news bulletins.

As many as 150 jobs are expected to be cut following a review of the network’s news and other operations. International bureaus may also be affected or shut down and the network is to embark on a program of voluntary redundancies — barely 18 months since the last round of staff cuts.

Wake Up was launched amid much fanfare in November last year. Both Wake Up and Studio 10 were initiatives of former Sunrise producer Adam Boland who had joined Ten from Seven early last year. In the case of Wake Up, much was spent on decking out the Manly surf club with a television studio and a fibre-optic link back to Ten’s main premises in the the suburb of Pyrmont.

Wake Up initially hoped to offer a point of difference to Sunrise and Today with a promised emphasis on music performances and a more relaxed atmosphere with its beach backdrop. Only days after the program launched Boland took extended sick leave and was to resign shortly after. Meanwhile, co-host Natasha Exelby was removed from the program and the format of state-based news updates was abandoned. News presenter Nuala Hafner was due to shift from Melbourne, where the news updates were presented from a studio at Federation Square, to join co-hosts Natarsha Belling and James Mathison at Manly.

Ratings for Wake Up failed to improve on those of its predecessor, Breakfast, with figures averaging around the 30,000 mark nationally. Sunrise and Today both average around ten times that number.

The late night edition of Ten Eyewitness News was relaunched earlier this year with Hugh Riminton as presenter.

Peter Meakin, the former Nine and Seven news boss who was hired last year to boost Ten’s news profile, has been left with a much smaller portfolio to manage — with just the 5.00pm Ten Eyewitness News and The Project as ongoing news outlets.

“Clearly the board has had a look at it and this is the decision they’ve made and I guess we have to live it,” he told Fairfax Media. “Whether I disagree with the cuts is purely academic. I’m not briefed to run the company and have very little financial experience.”

Last month Ten had announced a half-year loss of $8 million.

Permanent link to this article: https://televisionau.com/2014/05/ten-puts-wake-up-to-sleep-axes-news-jobs.html