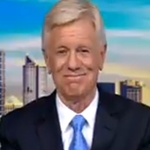 After 52 years in the business, 43 years in Melbourne television and 26 years at Ten, Mal Walden last night presented his last of an estimated 12,000 news bulletins over his career.

After the final montage of career highlights, including Walden’s early radio career plus his covering of major news stories dating back to Cyclone Tracy in 1974, he gave an emotional farewell paying tribute to his family, to past and present colleagues and “the team” that put the news together each night. He passed the newsreading baton over to colleague Stephen Quartermain before his final thanks to the viewers across Melbourne and Victoria that have supported him and welcomed him into their homes.

Speaking on 3AW earlier in the day he declined to refer to himself as “retiring” but rather mentioned moving into a mentoring role at Ten. In the meantime he looks forward to being able to sit through a complete episode of The Bold And The Beautiful, after many years watching the closing scenes of each episode on a monitor in the lead-up to the news. Permanent link to this article: https://televisionau.com/2013/12/mal-walden-signs-off-from-ten-news.html