The future of TV is looking Healthy? Keyte flies into prime time
Seven‘s Melbourne newsreader Jennifer Keyte is set to host her own prime time show. The new show, tentatively titled The Jennifer Keyte Show, will feature current affairs and interviews with high profile identities. The new project marks a return to a national profile for the Melbourne-based newsreader who appeared on Tonight Live With Steve Vizard for its first two years. Despite the new project Keyte is expected to continue to read the 6.00pm Seven Nightly News in Melbourne. Seven is refusing to comment on the proposal but insiders claim that network chiefs in Sydney are ready to give it the go-ahead. 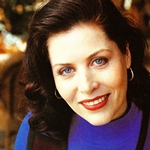 Comedy star’s other full frontal project
Viewers of Seven‘s Full Frontal might be shocked to see one of its stars, New Zealander Jennifer Ward-Lealand (pictured) playing the part of a lesbian in a melodramatic sex romp, Desperate Remedies. The film, set in a 19th century colony, features Ward-Lealand as a married woman who is having a secret lesbian affair. The film also includes male homosexuality with accompanying full-frontal nudity. Ward-Lealand said she had no problem with portraying the lesbian romance. “I don’t care who I kiss as long as they’re a nice person and don’t have bad breath!,” she told TV Week. “I like doing something that’s slightly left of field, anyway. It’s good to be in a film that causes a reaction… where people either love it or hate it.” Desperate Remedies also stars Ward-Lealand’s husband Michael Hurst as her on-screen husband, and Lisa Chappell. 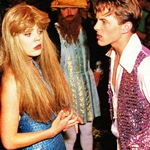 Fancy that!
As the season final of Home And Away approaches, what starts as a fun-filled fancy dress part becomes marred when a baby bombshell comes between Shane and Angel (Dieter Brummer and Melissa George, pictured) after he learns the former street kid is the mother of a three-year-old child.  And in another storyline, Sarah (Laura Vasquez) sneaks out of the party with bad boy Nathan (David Dixon), going against the wishes of her guardians Alf (Ray Meagher) and Ailsa (Judy Nunn), and has to decide how far she wants to take their affair. 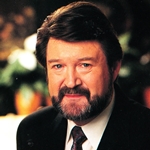 “The major ‘bombshells’ dropped by television executives in the lead-up to the annual silly season have been the demise of A Country Practice, followed by its resurrection; Steve Vizard‘s announcement in the newspapers that Tonight Live is dead; and the sacking of Derryn Hinch (pictured) by Network Ten. Then there’s Jana Wendt‘s return to television after her year’s sabbatical, and Ray Martin‘s much mooted move back into prime time, as host of A Current Affair. Frankly, it was the Hinch announcement that came as the biggest shock to me, despite the fact that talk of Alan Jones doing a show for Ten had been around longer than the Steve Vizard story. While at times (Hinch) is full of that trademark bluster, he has been a great workhorse for Ten, almost constantly keeping up with, or at least remaining within striking range of, the opposition’s Home And Away and Sale Of The Century. And, really, that’s been no mean feat on a network which has a run a fairly distant third all year. Hinch will go out firing and, like The Terminator, he’ll be back. It’s just a matter of when and where. The end of Tonight Live, though, does leave open an interesting scenario at Seven, particularly with the imminent arrival at the network of Andrew Denton and news that Jennifer Keyte will add to her Melbourne newsreading duties by fronting a prime time show next year.”

Sunday: Another day of golf from Concord (Ten, 12pm) while Nine crosses to Brisbane for the Mercantile Mutual Cup — Queensland versus Tasmania (11am). Talk To The Animals (6.30pm, Seven) presents a two-hour special episode from the US, including visits to various local attractions. 60 Minutes (7.30pm, Nine) presents its final show for 1993. Sunday night movies are The Addams Family (Seven), The Prince Of Tides (Nine) and Columbo (Ten). 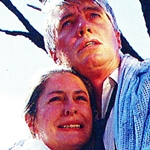 Monday: Singer Marina Prior is this week’s guest co-host on Sale Of The Century (7pm, Nine). A Country Practice bids farewell (until it resurfaces on Ten) in a three-and-a-half hour event (7.30pm, Seven), hosted by Stan Grant and comprising the two-hour final episode and a special look back at highlights from the past 12 years, including guest appearances from former cast members. The final episode sees a thoughtless act lead to a bushfire threatening the residents of Wandin Valley. With the approaching fire the Wandin Valley Hospital is evacuated, except for Terence and Rosemary (Shane Porteous and Maureen Edwards, pictured) who find themselves trapped.

Wednesday: In the season final for Newlyweds (8pm, Seven), tension is high in Peter (Chris Gabardi) and Allie’s (Annie Jones) flat when they have guests over to celebrate Christmas. Science program Quantum (8pm, ABC) presents its final episode for the year.

Friday: In the season final of Home And Away (7pm, Seven), Shane (Dieter Brummer) accuses Angel (Melissa George) of betrayal after he finds out she is the mother of a three-year-old. The Great Outdoors (7.30pm, Seven) and Burke’s Backyard (7.30pm, Nine) present their final shows for the year. After four years, Tonight Live With Steve Vizard (10.30pm, Seven) comes to an end.