Nine brings 4.30 news back to Perth

Seven and Prime renew their partnership Gary Sweet injured in Rescue stunt
Gary Sweet has suffered a back injury while filming a scene for Police Rescue: The Movie. Sweet, who takes pride in performing all his own stunts, was abseiling down a rock face when he was not given enough rope to land properly. He landed on his back on rocks. “Gary had to be taken to hospital for an X-ray,” a production spokesperson told TV Week. “Luckily, he only had bruising around his back.”

Breaking up with laughter!
The real-life divorce of comedian Maryanne Fahey from husband Ian McFadyen will provide inspiration for the upcoming second series of ABC comedy Kittson Fahey. Fahey’s popular character Kylie Mole, made famous in The Comedy Company, will talk about the divorce of her parents and her mother having an affair with the father of her friend Amanda. The storyline sees Kylie Mole take on a more grown-up persona. “She was just a schoolgirl last time she appeared,” Fahey told TV Week. “But going through a marriage break-up is devastating. The adults have some say in it at least. It’s hardest on the kids.” 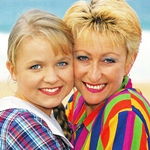 Summer Bay mum is a different woman
In Home And Away, abusive mother Irene Roberts is back in Summer Bay — but now she’s a different woman. Previously played by Jacqui Phillips, the character is now played by stage performer Lynne McGranger. “Initially, when Jacqui played her, she was a drunk, very cruel to her children and very violent,” McGranger (pictured with on-screen daughter Tina Thomsen) told TV Week. “But by the time I started to play her she had given up the grog and was on the mend. Irene is such a wonderful woman to play because I really do get to let loose on her. I occasionally get hauled back into line when they say, ‘Oooh, a little bit too over-the-top’, but I think that’s just my cabaret roots.”

“Ghostwriter, a new series from America’s Children’s Television Workshop, the makers of Sesame Street, was conceived for the best reason — need. Its aim is to teach and enhance literacy in seven-to-ten-year-olds, especially nine and ten-year-olds who are economically disadvantaged, or from minority groups. Its sincerity can’t be questioned, but whether it does talk down to its audience is another matter. My feeling is that it does, but, then again, it’s a fair while since I was nine (or even 10!), so I’m happy if my judgement here is way off.” 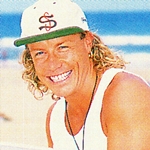 Monday: In A Country Practice (7.30pm, Seven), Hugo (Gavin Harrison) arranges for Christina (Rebekah Elmaloglou) to attend a camp for young people with cancer. It becomes an emotional time for Kate (Michelle Pettigrove) as the camp brings back memories of the time she had leukaemia.

Thursday: In Neighbours (6.30pm, Ten), Pam (Sue Jones) discovers that Doug (Terence Donovan) doesn’t have a job. In Secrets (8.30pm, ABC), Gary (Marshall Napier) is assigned to babysit an IRA agent and is shocked when his new friend reveals a horrific secret.