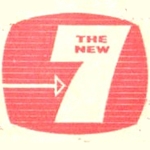 While most TV stations in shutting down their analogue signals have tackled the event with the mere flicking off a switch at the transmitting tower without any fanfare, Brisbane’s BTQ7 managed to broadcast a brief sign-off sequence, effectively flashing the previous 54 years before our own eyes before settling on a reconstructed black-and-white test pattern and then switched over to static.

Kev Dickson, who was at BTQ7 when it first commenced transmission in November 1959, was at the transmitter site to switch off the analogue signal.

The VHF channel 7 frequency in Brisbane is now assigned to SBS‘ digital signal which will make its final migration from UHF in about a month’s time with the re-tune.

Rival channel QTQ9 marked the event with Hugh Cornish, the first person to appear on the station when it launched in August 1959, flicking the switch to turn the analogue signal off.

Regional WA is the next market to lose analogue signals, on 25 June, while Darwin, remote central and eastern Australia, Sydney/Central Coast and Melbourne will be the final markets to lose analogue later in the year.

Permanent link to this article: https://televisionau.com/2013/05/brisbanes-farewell-to-analogue.html