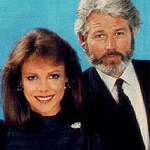 The Nine Network has dumped plans to remake the 1980s drama Return To Eden.

The series, first announced back in July, was to be produced for Nine by McElroy All Media, led by Hal and Di McElroy, producers of the original.

The Sydney Morning Herald reports that it was budget restraints, not creative differences, that led to the cancellation.  The network will continue with existing productions House Husbands and Underbelly: Squizzy as well as other projects already in the pipeline, including a big-budget production based around Gallipoli.

Return To Eden was a ratings hit for the Ten Network when the original mini-series aired in 1983.  A spin-off series produced in 1986 (starring Rebecca Gilling and James Smillie, pictured) was moderately successful in Australia but was a hit overseas.

The shelving of the Return To Eden remake comes just as another ’80s series, Prisoner, is about to make its debut in a modern-day version on Foxtel.

Permanent link to this article: https://televisionau.com/2013/03/return-to-eden-reboot-dumped.html