Raised in the remote Queensland town of Texas, Hitchener’s career began in the 1960s at Brisbane radio station 4BH before moving to the ABC in Brisbane and then in Sydney. 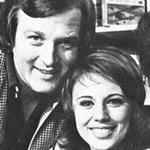 He made the move to TCN9 Sydney in 1973 as a fill-in for newsreader Brian Henderson and host of game show Gambit (with co-host Ros Wood, pictured).  A year later he went further south to GTV9 in Melbourne.

In the mid-1970s he was the Melbourne anchor for News Centre Nine, the joint Sydney-Melbourne newscast.  The twin-city bulletin experiment was not a huge success but after its demise Hitchener went on to become deputy newsreader alongside returning news veteran Eric Pearce.   When Nine scored a coup in signing up Brian Naylor from HSV7 in 1979, Hitchener was appointed chief weekend newsreader.

Hitchener has also worked in Melbourne radio, with stints at 3AW and presenting the breakfast program for several years at GTV9’s then sister radio station 3AK.

Upon Naylor’s retirement in 1998, Hitchener was the natural choice as his successor as chief newsreader at National Nine News in Melbourne.

Although Nine News is currently at a ratings peak after a few years trailing behind Seven News in Melbourne, Hitchener admits that he has one regret — that he’s not yet had the opportunity to report a St Kilda victory in the Grand Final. Permanent link to this article: https://televisionau.com/2013/01/3aw-honours-peter-hitchener.html