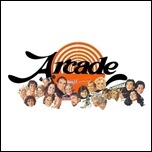 Featured in the program last week was Arcade cast member, TV Week Gold Logie winner Lorrae Desmond and one of the show’s creators, David Sale, to discuss with Mercado just what went wrong with the show that was hoped to be the ratings hit of the 1980s.

Sale was the creator and writer for the successful drama Number 96 (1972-77) and in 1979 was hired along with Number 96’s former executive producer Bill Harmon and story editor Johnny Whyte to turn the then 0-10 Network’s concept of a shopping centre-themed drama into a prime-time series that could take on ratings heavyweights like Willesee At Seven and The Sullivans.  The team came up with a quirky mix of characters that would run the stores that made up the fictional shopping centre in a series that would feature a broad mix of comedy and drama.

Arcade was rushed into production late in 1979 and debuted across the newly-relaunched Ten Network in a movie-length episode on Sunday night, 20 January 1980, before settling into a regular half-hour timeslot each weeknight with the hope that it would gain a following before the ratings season was due to kick off in February. 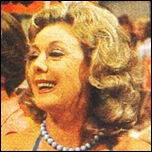 Despite Ten spending a fortune on constructing a mock shopping centre in its main Sydney studio, and hiring a cast featuring veteran performers such as Desmond (pictured, as newsagent proprietor Molly Sparks), Peggy Toppano, Mike Dorsey, Syd Heylen and Aileen Britton, the end result left viewers and critics dumbfounded by some fairly rudimentary storytelling and some stilted performances, including one infamous scene where a young actress is shown to be virtually reading straight from the script.

After copping much criticism and dismal ratings the series, originally heralded by Ten as being “a breath of fresh air”, ended up being removed from the schedule after six weeks – a duration that in today’s terms seems like a lifetime considering its shaky start.

The upside from the experience is that two of the show’s stars, Desmond and Heylen, went from Arcade to long-running roles in the popular series A Country Practice, while some of the show’s younger cast members, such as Jeremy Kewley, Tracy Mann and Christine Harris, went on to have their own career success.

With only around 30 episodes aired before Ten pulled the plug (and hopefully they’re all still in the archive) and given its legacy of being such a monumental flop, Arcade seems a prime candidate for getting a DVD release so that it can be re-lived in all its bargain basement glory.

The Playlist is an entertaining panel discussion of all things related to television – although at five minutes per episode it is far too brief – and appears every Monday and Friday evening on pay-TV channel Showcase and is repeated the following day.  It can also be viewed online at http://www.theplaylist.com.au.

Permanent link to this article: https://televisionau.com/2012/01/the-playlist-revisits-the-arcade.html