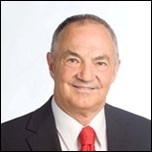 Adelaide newsreader Rob Kelvin has announced that he will be retiring from the Nine News desk at the end of the year.

His retirement comes after taking several months’ leave this year – “a fair sort of dress rehearsal for retirement,” he told AdelaideNow.

Kelvin had worked in radio in the 1970s, including radio station 4AY Townsville, 3SH Swan Hill, 7HT Hobart and Adelaide’s 5KA and 5AD, before joining NWS9 in Adelaide in 1979 as a sports presenter.

He moved into newsreading in 1983.  And it was in 1987 that he was paired up with Adelaide newsreading veteran Kevin Crease.  It was a partnership that continued for twenty years before Kelvin had to deliver the news that his long-time colleague had died from cancer in 2007.

News director Tony Agars says that despite retirement, Kelvin may still have a presence at NWS9:

“Rob now reads through until the end of the year.  After that it’s not the end for us. Rob is quite keen and I’m certainly very keen to have Rob with us for a while yet. We’re talking about some projects now that Rob can get his teeth into and certainly I reckon you’ll see Rob reading news as we’ve got holidays and things like that coming up.”

As well as reading the news, Kelvin has reported from the Commonwealth Games for the Nine Network, in Brisbane in 1982 and Auckland in 1990.  He also hosted NWS9’s 25th anniversary celebration event in 1984.

Kelvin now looks forward to spending more time with wife Anna and son Jesse and not having a life dictated by deadlines:

“No deadlines, that’s the amazing thing about retirement.  Once upon a time, I had a wrist watch that had six alarms on it and they were different things that I would have to do at different times during the day and it would go off for all these different things. And I haven’t missed a deadline that I’m aware of in 32 years.”

Kelvin will present his last Nine News bulletin on New Year’s Eve and Kate Collins and Michael Smyth, who both read the news over Kelvin’s recent absence, will front Nine News in Adelaide from 3 January.