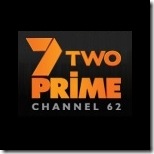 Christmas is coming a few days early for viewers of Prime Television with the announcement that the regional network will be carrying the Seven Network’s digital channel, 7TWO, from Wednesday 23 December.

7TWO will commence service on Prime’s digital transmission, covering Regional NSW, Regional Victoria, Canberra and the Gold Coast, at 9.00am on Wednesday on channel 62.  The channel will then broadcast 24 hours a day, 7 days a week.

The delay in bringing 7TWO to Prime’s digital broadcast has caused some frustration among local viewers, knowing that other regional outlets such as Southern Cross Television have been relaying the channel to smaller markets Tasmania and Darwin since early this month.

Permanent link to this article: https://televisionau.com/2009/12/7two-comes-to-prime.html