Starting his career in radio at Sydney stations 2GB, 2SM and regional station 2MW, Ross made the move to television, to Sydney’s TCN9, in 1965.  He then went to the United Kingdom for two years at news agency UPITN.  Upon returning to Australia in 1974, Ross returned to Nine – and would stay at Nine for the next 38 years.

For many years, “Roscoe”, as he was nicknamed, gained a national profile as the newsreader on Nine’s breakfast show, Today, before going into semi-retirement. 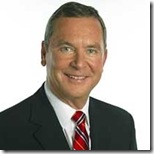 In December 2003, the Seven Network scored a coup by signing up Ross to replace Ross Symonds and Ann Sanders as the chief newsreader for Seven News in Sydney.  Ross’ arrival at Seven came a year after the ever-popular Brian Henderson had retired from rival National Nine News after forty years, and it marked a significant change in Sydney’s news viewing habits, as Seven News, forever the runner-up in Sydney’s fierce TV news battle, had become the city’s top-rating news service.

Permanent link to this article: https://televisionau.com/2009/11/ian-ross-signs-off-for-the-last-time.html