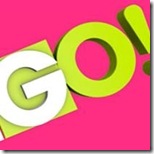 After months of rumour and speculation, Nine Network chief David Gyngell has finally confirmed the name and launch date for its new digital channel – Go!

The new channel will launch on 9 August, promising a line-up of youth-oriented programming in a bold tackle against youth-focused Network Ten and pay-TV channel Fox8.

The new channel will feature US titles including Gossip Girl and The Wire as well as familiar titles including Survivor, Fringe, The Hills, Weeds, The Bachelor, Kitchen Nightmares and comedies Curb Your Enthusiasm and Seinfeld.

The new US series Vampire Diaries is also headed for Go!

Gyngell has told media that Go! is a winner for viewers:

“This multi-channel is a natural evolution for Nine and for free-to-air television.  And that’s the key word – FREE. It means that within weeks our viewers will have access free of charge to a second channel offering quality and a great deal of first-run content through its schedule.

“It’s a win for our audience because it offers more diversity and substantially wider viewing choices than ever before, at no cost.”

Regional Nine Network affiliate WIN is also set to carry Go!, though it is unclear if the Nine-owned regional broadcaster NBN, serving Northern NSW and the Gold Coast, will also follow suit.

The August launch of Go! now brings the number of Freeview channels (in metropolitan areas, at least) to thirteen – which includes each network’s primary standard definition channel plus HD simulcast channels broadcast by Nine, Seven, ABC and SBS.  Unique channels on the Freeview/digital TV platform are One HD, ABC2 and SBSTWO.

A third ABC channel, aimed at children, is to launch later this year.

Meanwhile, the Seven Network – the one network that reportedly pushed for multi-channelling by commercial networks on the digital platform  – continues to stay silent about its digital plans.

Permanent link to this article: https://televisionau.com/2009/07/nines-ready-to-go.html