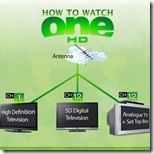 After the Welcome To One special, the first event to be broadcast on OneHD in Melbourne, Adelaide and Perth will be tonight’s opening round AFL clash between Richmond and Carlton from the MCG. The sell-out game has prompted Ten to re-schedule the Melbourne broadcast to commence live-to-air at 7.30pm instead of delayed at 8.00pm. The Swimming Australia SKINS event will be the first event aired on OneHD in Sydney and Brisbane from 8.00pm.

OneHD can be found on channel 1 on high-definition tuners in those cities. The channel is also simulcast in standard-definition on digital channel 12.

Viewers in regional areas and smaller capital cities Hobart, Darwin and Canberra will unfortunately have to wait for the channel to be made available through local affiliates such as Southern Cross Ten, Tasmanian Digital Television and Darwin Digital Television. Apparently negotiations are still in progress for these outlets to carry OneHD.

OneHD will also be available via Foxtel in both high-definition and standard-definition formats.

Permanent link to this article: https://televisionau.com/2009/03/the-wait-is-over-tonight-for-one.html